It has been absolutely tremendous all the outpouring support there has been for Fort McMurray. The country music family has come together to do what they do best, by putting on benefit shows to help raise funds for Fort Mac. There already have been many benefit concerts and still many more to come all across the country and last Thursday evening at The Phoenix Concert Hall in Toronto, it was our turn to show our support for FortMac. It was amazing to see all the many talented artists gathered in one venue to show their love and support. I am truly proud to be Canadian and proud of the country community for rallying and coming together for our fellow Canadians.

I would like to take the opportunity and thank all of the artists involved for donating their time and rocking out for a great cause! I would also like to acknowledge and thank Sound Check  Entertainment and KX Radio for putting on such an incredible evening filled with a star studded lineup of very talented Canadian country musicians. Congratulations on such a successful evening raising over $50,000! It truly was a special and incredible night!

Madeline Merlo began this very special and intimate acoustic evening by taking the stage first. Perched on a stool with here ukulele Madeline’s sweet beautiful voice echoed through The Phoenix to Sinking Like A Stone.  This was my first time seeing her live and her voice is so lovely! Madeline I am looking forward to seeing more of you throughout the summer festivals. 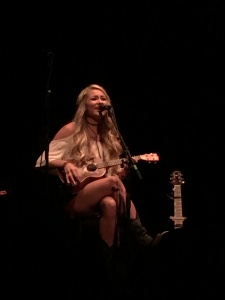 James Barker Band got a little Lawn Chair Lazy with us next. James, Taylor, Bobby and Connor are such a great group of fun guys. I have to say you choked me up, along with other members in the crowd with your amazing tribute to Alberta and Fort Mac, with Paul Brandt’s Alberta Bound. It was so beautiful, well done boys! 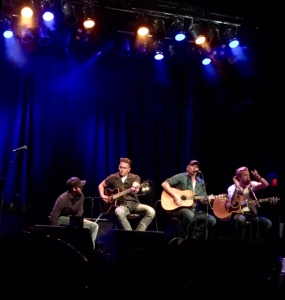 The crowd was Love Drunk with Andrew Hyatt’s performance. Unlike the previous band, Andrew took the stage solo with his guitar and he sounded just as powerful up on stage by himself. Andrew hails from Sudbury Ont. and has been referred to as the man with “Nickel bones and a Nashville soul”. This guy is truly country! 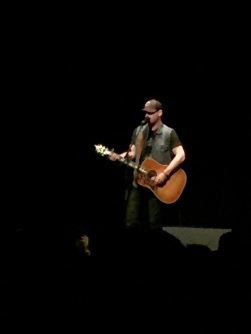 Mr. Tim Hicks took the stage next and told us “It was gonna be a good night” with I Got A Fellin and let me tell’ya we were all Feelin it! With the crowd having such a good time and the bevy’s were flowin’, Mr. Hicks shared a song that he never had played live before and we all raised our glasses to Fort Mac to Let’s Just Drink. This coors drinkin’ girl loved the line “Nothin’ else to do when the mountains are blue but drink” Well, cheers to you Mr. Hicks! Now, you gotta love when the curtains closed on Tim and he was just about to kickoff Stronger Beer, well Tim wasn’t done, so they re-opened the curtains back up for him and we all sang along, or at least tried ’cause Tim called us out and said “you don’t know the words”…I don’t know ’cause it was pretty loud in there, so was that “all kidding aside” Mr. Hicks?!?

The beautiful Meghan Patrick followed and let me tell you, this girl has got it goin’ on! She took the stage and asked us to Be Country With Me, this song is so beautiful and it was amazing hearing an acoustic version live! Meghan was so delighted to be apart of this benefit concert, she said “It’s amazing all of us getting together for a great cause and it’s great to play with friends and all these other Canadian artists”. Well it definitely was amazing to see all these artists together! I have to mention, I was backstage and I didn’t even recognize her at first, it took me a few seconds and I was like oh, Meghan Patrick.  While onstage she even mentioned about being all dolled up in a dress. Not a normal look for this Grace & Grit girl, but girl you looked gorgeous!

I had the pleasure of sitting down before the show with the next artist, Dani Strong and we chatted about the last time we were at the Phoenix. You see, we were here at the Phoenix a month ago for the Boots & Hearts CMW Hot shots showcase and it was the actual Tuesday night that the Fort Mac fire took place. Dani took the stage and before beginning her set asked us all to keep Fort Mac in our thoughts and prayers. We both couldn’t believe a month later we were back in the same venue having a benefit concert for them, who knew that night what devestation they were actually going through. Well it was great to see Dani accompanied by her very dear bandmates, Mike and Shane and her husband Grant back on stage. They are a very close band who have been together since the beginning and you can see that in their stage presence. Dani has an absolute beautiful smile to accompany her beautiful voice. Get ready ’cause they are set to release their album this summer! Also, check out my interview with Dani!

Cory Marquardt took the stage next and I actually had the pleasure of sitting down with him too a couple months ago, check out the interview, he’s got such a great story!  Cory solo on stage played one of his latest singles, Nowhere With You, he looked great onstage rockin’ on his guitar. He has such an incredible powerful country voice. Cory also sang one of his idols, Merle Haggard’s song Take me Back Home, he had us all raising a glass to the Hag.

Autumn Hill kicked off their set and really got the crowd going with a little Bon Jovi Livin On A Prayer. Then playing a few of their own, including one of my favourites Blame, the duo Tareya and Mike looked and sounded so great up there! They echoed every other artist and said they were so happy and proud to be apart of this and the country community and so they should be!

Jason Blaine was up next and another solo guy taking the stage, he too sounding great and looking good! Jason began his set with his hat backwards and singing They Don’t Make’Em Like That Anymore, stopped and turned his hat around saying ‘Grandpa wouldn’t like that” and so many could relate to that! It was perfect, Grandpa would be proud of that! Blaine changing up his words to, “They Don’t Make Fort Like That…” was just like the other artists happy and proud to be on stage apart of the night saying, “Sticking together, this is what we do!” Jason your so right, this is exactly how we roll!

Alberta native Wes Mack was next up and he really got the crowd going with Come Around, the words just echoing throughout the concert hall. Wes talked a bit about of being from Alberta and spoke of some other difficult times they have gone through, but said, “Albertans are tough and they have been knocked down before, but only to come up stronger!”  I couldn’t agree more! #AlbertaStrong

The Wheels Came Off with Cold Creek County and they really got the crowd singing and I think they could even hear us out in Fort Mac. These guys are a lot of fun and you can really tell they are having a blast on stage with each other and the crowd. They nailed a rendition of Welcome To My House and then brought it home with This Is Our Town and Toronto was their home that night! CCC just like all the others, were proud and happy to be apart of this saying, “This is truly a blessing, so proud to be apart of this night. From the bottom of our hearts we thank you, this is such a great cause, we gotta stick up for each other.” It was a perfect finish to an incredible night!

This entry was posted on June 16, 2016 by countrymills in Benefit Concert, Country.