Alessia Cohle has just released her debut album Talk To Me that you can download now from iTunes. Alessia has an extensive background in music and is a very talented artist with such a beautiful voice. I had the pleasure to chat with Alessia about her album and this exciting time for her.

Jocelyn: Congratulations Alessia on the release of your new Album Talk To Me

Alessia: Thank you. It is very exciting! It’s up and out on iTunes!

Jocelyn: Can you tell me a bit about your album and what people can expect

Alessia: It is a really good, (laughing) but I am a bit biased, it is a good reflection of who I am now as an artist and as a song writer. I co-wrote 9 of the 11 tracks and I am very proud of all 11 songs. Even the two I didn’t write, I was trying to write those songs to be perfectly honest but the two songs kind of fell into my lap and were pitched to me. One of my producers pitched one of the songs to me as she was one of the writers on it. The other song, a good friend of mine who wrote it, said I want you to be the one to sing this song. So I was very honoured as a singer to receive those messages. I was even really happy when they made the cut , the messages behind the songs was very much how I felt. The lyrics and music are a reflection of who I am. Which I love, there is definitely some of my truth in each of my songs. For me as a song writer, I like to start with an idea or a title and  make it truthful in some sense. Even if it goes off and verse away there is still truth behind the song.

Jocelyn: With that being said, that leads me to my next question, what are some of your inspirations for your songs?

Alessia: Literally what is going on in my life, what is going  on in my friends life. There is a track or two on there that my friend will tell me a story and I am like that needs to be a song! So just what is really happening around me  and what I feel in that moment. Someone will say something and that will spark an idea and I kind of run with it.

Jocelyn: That goes along with what you were saying about the album and that you like to have truth to your songs and when you are writing your story or a friends story and what you know there is truth behind that.

Alessia: Exactly, it is an easy way to put truth behind my music.

Jocelyn: Now this alum is Factor Funded, can you tell me a bit about the program.

Alessia: Yes, that’s correct my album has been Factor Funded. It is a government agency, they help finance and fund independent artists and music festivals, just basically the music industry. I received a jury sound recording grant. They have all different levels and programs that help fund music videos, music festivals and recording projects. It is really exciting and great to have something like this in Canada.

Jocelyn: Well that is definitely exciting and congratulations on being awarded funding from them. Now, how long have you been singing for and how did you know you wanted to be a country artist.

Alessia: Well my parents like to say I have been singing since birth, literally singing before talking. But I Officially say since I was around 8 years old. My Grandfather and Father they had a band and sang Italian Folk music across Ontario. They would have me coming up on stage with them since I was about 8 up until well really they still would have me up with them today if they were still doing it. My Grandfather no longer sings, he had a stroke 6 years ago, but up until 6 years ago I was doing it with them. Then my mom took me to my first concert ever, a Shania Twain concert and I remember pointing to the stage and saying to her this is what I am going to do. Music is literally the only thing I have ever done. I went to a High School for school of the arts, I then went to Western and got my masters of music. I then continued and got my masters of music from Berkley College in Spain. It literally has just been music since I was 7 years old.

Jocelyn: I would assume it is safe to say then Shania Twain would be a large influence in your music.

Alessia: Oh yes, she really is a huge influence on my music. I am influenced by a lot of different music. I have been in all different styles of bands and at school they encourage you to try different things and because I was in an arts program I could be in the jazz band, in the choir and the pop/rock band and really got a taste of different genres. I was in my Dads band and my parents really brought me up listening to everything from classic rock, r&b, Motown and soul so there is definitely that influence in my music. In terms of country music, it just made sense for me. It was always the genre I loved and felt connected to to and just made sense to me.

Jocelyn: How was the process of going through making your album?

Alessia: Well I had experienced going through the making of my EP in 2014/2015 and released it in June 2015. With this process it was a lot different and I had three producers on this record. Going back and forth with the three producers figuring which songs they were going to produce and which songs we were going to have on the album. Then making sure collectively it sounded cohesive I didn’t want one song to sound like it came from left field and I really wanted to make sure that it had me across the whole board. So it was really exciting and I love then going into the studio and listening to the musicians record what I have written. A song when you write it is a skeleton and just words and basic cords. Then you hear all the different elements and instruments and layers that are adding to it. It really is amazing and inspiring to watch all that come together.  Then when I go into record the vocals on top of that it just amplifies the emotion that I am trying to convey. It is such an incredible feeling.

Jocelyn: Will you be doing a radio tour or tour dates to promote your album?

Alessia: Yes, well actually I just completed an east coast radio tour. I went out in October and the east coast was just so incredible. Everyone was so charming and they welcomed me with open arms. I got to see a lot of the radio stations out there. Then through out this month and December I am going to go around Ontario and setting up dates around here my home province. Then I hope to go out to the west coast in the early spring to do some promotions out there.

Jocelyn: You have have our album release party November 15th?

Alessia: Yes, at Lula Lounge. I am really excited for this. I have some incredible musicians that will be on stage with me. I am really looking forward to performing the album live.

Jocelyn: So this will be your first time performing these songs live?

Jocelyn: Well Congratulations Alessia I wish you all the best and great success with your album! 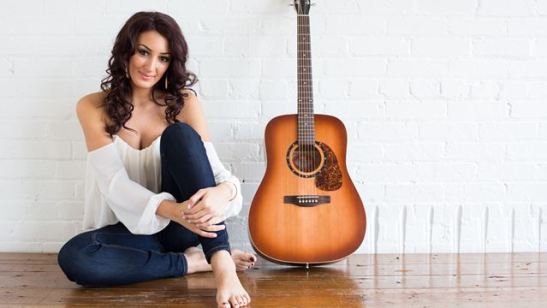 This entry was posted on November 15, 2016 by countrymills in Alessia Cohle, Country, Interview.