After a wicked Kickoff party, Boots and Hearts Day 2 was set to go and it was a fun filled one. The schedule was jammed packed with some amazing artists both on the front porch and main stage.

It was a big week for Brea Lawson, not only getting to perform at Boots and Hearts but she also just released her single Daddy’s Moonshine to country radio. She has an amazing voice and beautiful look to boot! I look forward to hearing more from her!

Lindsay Broughton followed and just as beautiful, with a great voice too this girl knows how to rock a guitar! She was so happy to be at BH. She sang her new hit single just released to country radio, We Don’t Mix. This is her first single from her new album, which is set to release in the fall. This is Lindsay’s second album and she is making great head way in the country music scene! 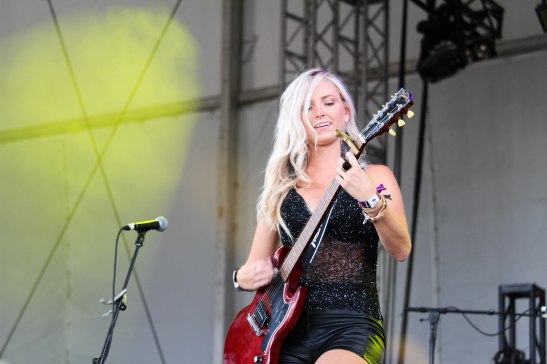 Cory Marquardt kicked things off on the main stage and got things rocking with his hit Don’t Count Saturday night. Cory’s voice is incredible and he just rips the guitar, if you haven’t had the chance to check him out you are missing out! He did some awesome covers but played more of his hit singles, including his hot summer jam Nowhere With you. He closed out with his killer tune 21. 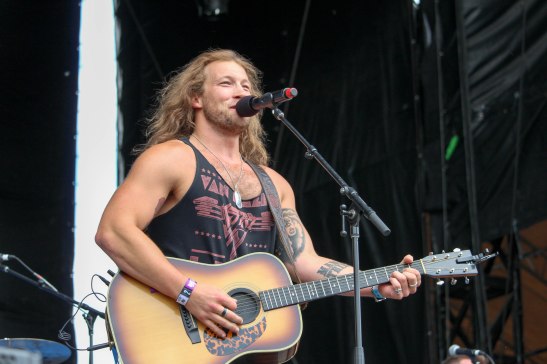 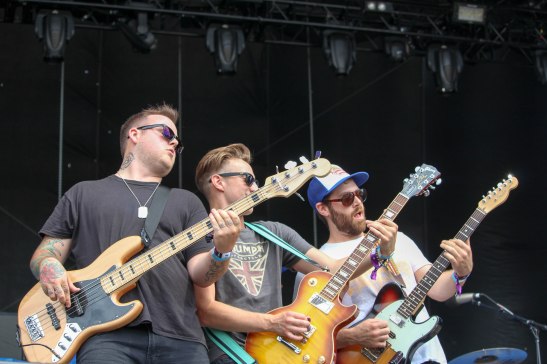 David James an up and coming artist and newbie to Boots and Hearts had quite the afternoon crowd gathered around the front porch stage. He’s got a killer voice and just rocks the guitar. James just released his debut album, earlier this year entitled Song’s About A Girl. Sending a shout out to James as he has been nominated for the upcoming CCMA awards for Rising Star and Recording Package of the year! Best of luck to you! 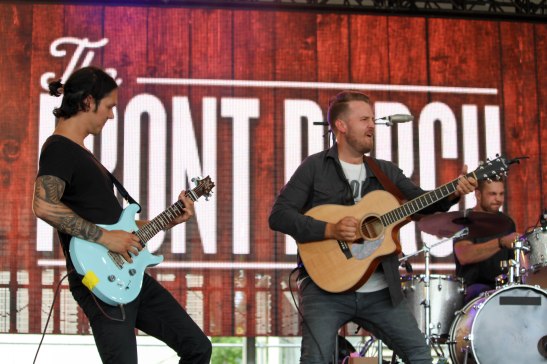 The Reklaws were full of energy and so pumped to be back at Boots. They put on one hell of a set! BH feels like home for them and sang a very fitting song, Homecoming. It is such a beautiful song! Although it began to rain during their set, it was a refreshing summer’s rain on a hot day and it didn’t rain on their parade! Jenna and Stewart came out to the end of the cat walk pulled out a bench seat and had a beer with us. These two are awesome and so full of energy they always give it their all on stage! 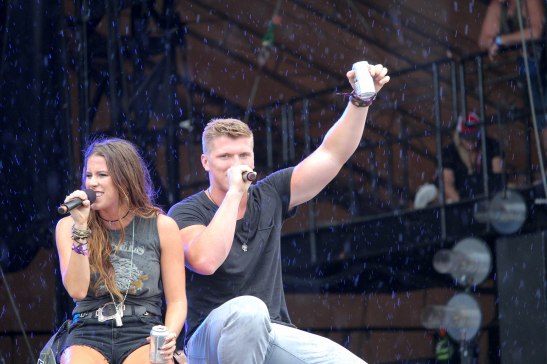 The Dungarees took over the front porch stage and they are such a fun band from Edmonton.  They sounded great and harmonize so well together! These boys have got such a great classic country twang sound. They played their hit album entitled single Ain’t Through Being Happy Yet and had everyone singing along. 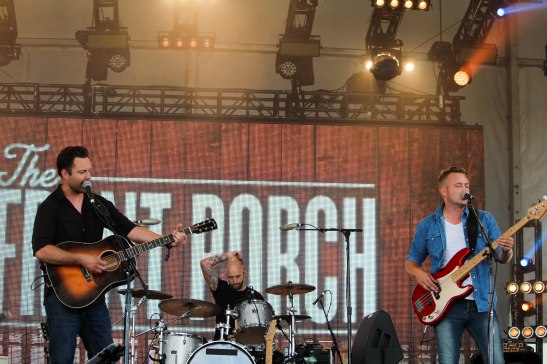 I have seen the duo of Autumn Hill live several times now and enjoy watching them. They perform so well together, they are so in sync and look so happy to be on stage. They sang so many of their hits including their debut single Anything At All and their first top 5 Canadian single Blame. 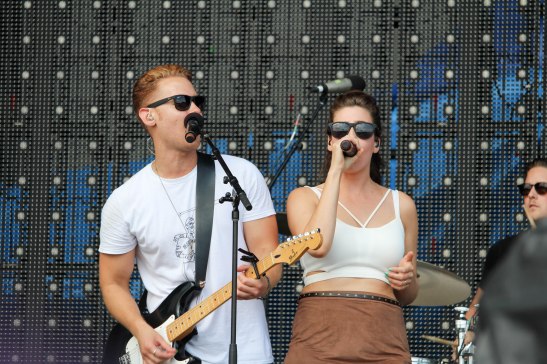 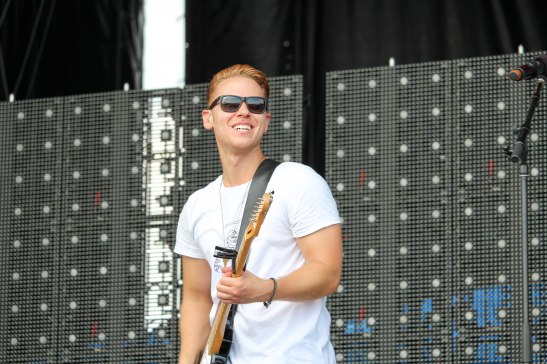 Tim Hicks is no stranger to boots as he is the artist who has performed the most amount of years. He has played four out of five BH! We missed you last year Tim but so glad to have you back rockin’ the main stage! Tim and the boys played to a large crowd and rocked our boots! He even brought a lucky group of fans out on stage for a drink and cheered all of Boots and Hearts to Let’s Just Drink. I mean really what else is there to do when the mountains are blue! I would definitely say Burls Creek falls into Tim’s Stompin’ Ground. 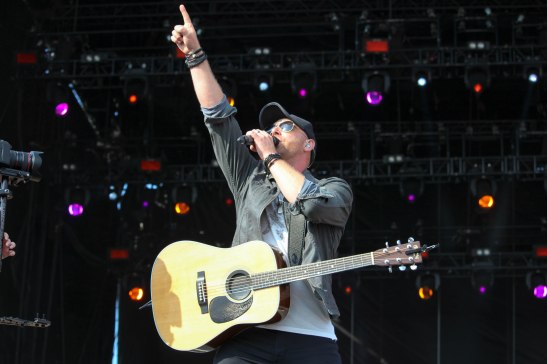 We made it back over to the front porch stage to catch Cam and so happy we did! She has such a sweet voice and it matches her beautiful looks. She had a lot of fun interacting with the crowd, even taking a very large moose hat and sporting it for an entire song! She finished off with her hit Burning House. 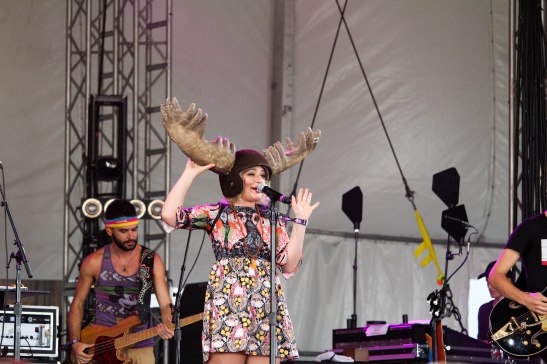 It was time for a House Party with Sam Hunt and the crowd was on fire for his set. He played his fan favourites, Take Your Time, Break Up In A Small Town and Make You Mine. I loved his  Merle Haggard tribute of Mama Tried. Sam had everyone going, especially the ladies.

Dierks Bentley took the stage and shot gunned a beer and asked “Does anyone want to have fun?” Well it sure was a lot of fun, the crowd and Dierks had a blast during his set! He was so thankful to be back at boots! “I have been thinking about being back on stage since I left it in 2013. I’ve been all across my country and in Canada but this is one special festival”. At Boots we love to show our love for our Blue Jays and we got into a good Let’s Go Blue Jays Chant and Dierks was just stunned saying, “Folks we have lost control of the crowd here” as he laughed.We then went Somewhere On A Beach with Dierks and it was awesome as he mixed in the Barker Boys Lawn Chair Lazy. But really who doesn’t need to be handed a beer on a beach, right!?! He then did a little crowd surfing as he took a leap of faith and jumped in the crowd but not before asking, “You got me, right!?!” Dierks finished off his amazing fun set as our pilot and we all Got Drunk On A Plane! It was an awesome finish to a great day! 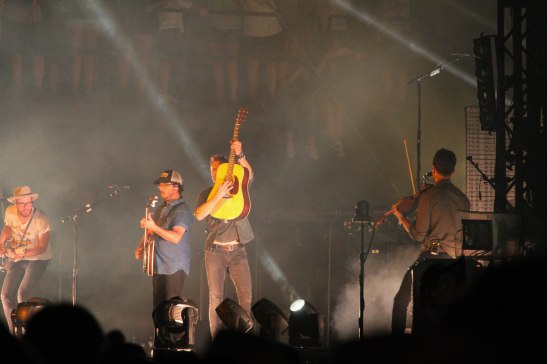 This entry was posted on August 18, 2016 by countrymills in Boots and Hearts, Country.